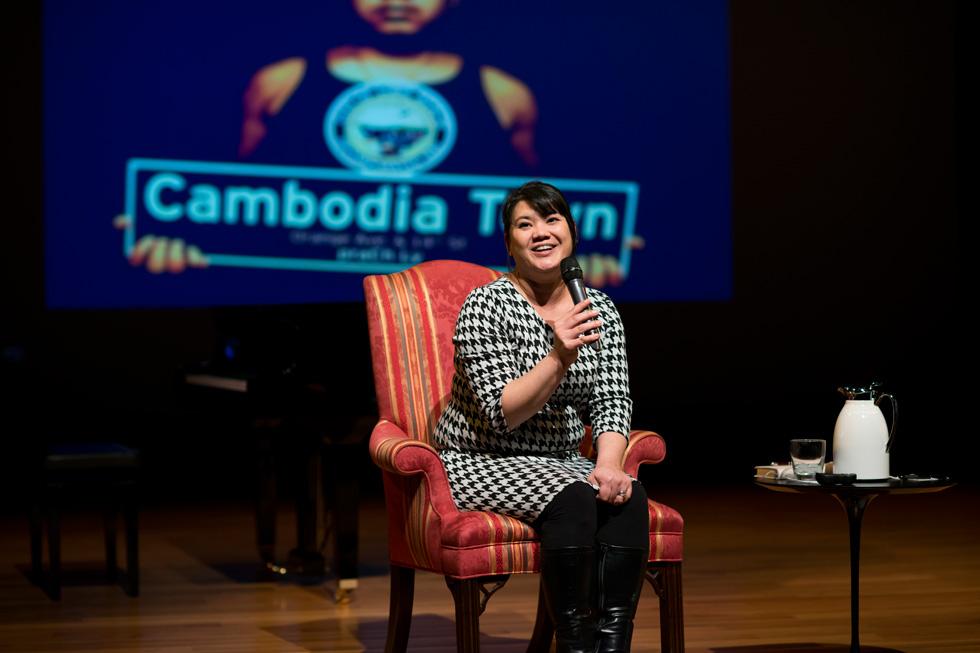 “War, Genocide, and Justice is exceedingly insightful. It illuminates the significance of the Cambodian American memory politics specifically in relationship to the U.S. exceptionalism and the amnesia over its militarized imperialist past it has sustained even in the form of remembering, justice, and reconciliation.” -Lisa Yoneyama, University of Toronto

Now director of the Asian American Studies Institute in the College of Liberal Arts and Sciences, Schlund-Vials recently published her second book, titled War, Genocide and Justice: Cambodian American Memory Work (University of Minnesota Press, 2012), which considers the legacy of the day-to-day lives of millions of Cambodians who were oppressed and killed by their government in the early 1970s.

In part because of this work, she is being honored with the annual Early Career Award from the national Association for Asian American Studies. She will receive the award during the Association’s annual meeting in Seattle, April 18-20.

“Nobody has done a book like this on Cambodian Americans,” she says. “It’s based on what critic James Young originally termed ‘memory work’ in relationship to Holocaust memorials: How do people remember periods of suffering and oppression? How are genocides remembered and forgotten?”

The Killing Fields era in Cambodia was a period between 1975 and 1979 when about 2 million Cambodians – by some estimates 25 percent of the country’s population – died from execution, famine, forced labor, and poor medical care. Led by communist dictator Pol Pot, the government, called the Khmer Rouge, forced people out of cities and into the countryside to work in the fields.

“The Killing Fields was a time where the government forcibly evacuated cities, prohibited currency, and prohibited the practice of Buddhism,” says Schlund-Vials. “The idea was to go back to ‘year zero,’ before French colonialism and Western imperialism.”

Survivors of the period, mostly senior citizens now, can be loath to talk about this horrible time in their lives. But their children, many of whom, like Schlund-Vials, came to the U.S. as children, have started to tell their parents’ stories.

“I wanted to know how people of Cambodian descent, who now live in the U.S., remember that time,” she explains, “by talking to artists whose parents lived through it.”

This generation, which Schlund-Vials calls “1.5-generation” Cambodian Americans, has emerged in recent decades with artistic renditions of their parents’ legacies.

One example is hip-hop artist Prach Ly, whose stage name is praCh. His parents lived through the Killing Fields, and in 1999 he wrote and produced an album in his garage that included lyrics from his father’s point of view, retelling his story of the atrocities and his survival.

The album, called Dalama: The End’n Is Just the Beginnin’, was quintessentially Cambodian-American in its lyrics and its musicianship, says Schlund-Vials.

“It fuses a Khmer backbeat with a hard rap beat,” she describes. “He recorded it in his garage, not for fame, but for himself and his family. It memorializes the Cambodian-American experience.”

To his astonishment, a bootleg copy of his album found its way to Cambodia, where he became the #1 artist in the country in 2000. He’s now credited with introducing hip-hop music to Cambodians.

These types of grassroots memorials are important to the Cambodian legacy, and they’re made even more so because the current Cambodian government has not erected a state-sanctioned memorial to the Killing Fields, Schlund-Vials says. Several important prison sites and fields are open to tourists, but ironically, she notes, Buddhist Cambodians tend to avoid such sites because their religion tells them the areas are haunted by those who suffered inauspicious deaths.

As director of the Asian American Studies Institute, Schlund-Vials has overseen the rapid expansion of the program in the past few years. Five new faculty members in the Center will join UConn in fall 2013, including Meina Cai, a political scientist who studies Chinese politics, and Bradley Simpson, a historian who studies Indonesian history.

“When I came to UConn, I was struck by the need to engage emerging transitional and diaspora studies,” she says. With 40 students in the Asian American Studies minor and more joining each year, the affiliate base is steadily growing, she adds.

When Schlund-Vials travels to give talks around the country, local Cambodian American community members turn out to hear her speak. This is especially satisfying, she says, because it bridges the often-wide gap among scholars and artists, and scholars and the public.

“The task before me is to make relevant these experiences to a larger population,” she says, “to make issues of citizenship, migration, and oppression understood to us all.”